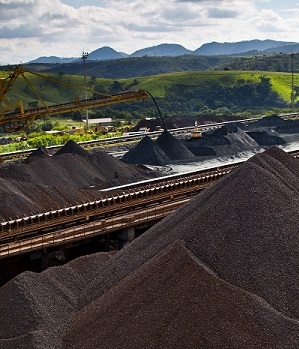 CSN Mining, the main subsidiary of CSN in the sector, is the second largest exporter of iron ore in Brazil and sixth in the world. The high-quality assets of CSN Mining are located in the Iron Quadrangle, which notably include the Casa de Pedra Mine in Congonhas (MG). Iron ore products for export are transported by MRS to the Port of Itaguaí (TECAR), in the state of Rio de Janeiro

In addition, CSN has the Arcos mine, also in Minas Gerais, which produces three types of limestone, used as raw material for the manufacture of steel and for the production of clinker, the main input for cement.

In Rondônia, ERSA, a subsidiary of CSN, produces tin, a raw material used for tinplates in the packaging industry.

Casa de Pedra, located in Congonhas, Minas Gerais, is considered one of the largest open pit mines in Brazil. The extraction of iron ore begins with the drilling of rocks. Explosives are then placed into the rocks for fragmentation.

Excavators and wheel loaders remove iron ore from Casa de Pedra and dump it onto off-road trucks, which transport the ore to the crushing facilities. Overburden removed is transported to special piles distributed across the mine.

The ore is fed into sequenced crushers, where the particles are reduced to a few millimeters. This is the first stage of ore processing. After crushing, the material is classified.

Once received, the ore is classified according to particle size and chemical characteristics. There are three categories of products: lump, sinter feed and pellet feed.

The products are taken to the stockyards on conveyor belts. Piles of iron are then moved by four reclaimers and redirected to the train loading.

Via MRS Railway, the trains go to the Tecar Terminal located in Itaguaí, Rio de Janeiro. At the port, the train is unloaded by car dumpers.

Storage at the port

Products are stored at the port stockyards with the assistance of cable belts and stackers.

The ore is removed from the stockyards by reclaimers and redirected to capesize vessels through cable belts. Vessels sailing from the Port of Itaguaí will arrive at ports of several countries.